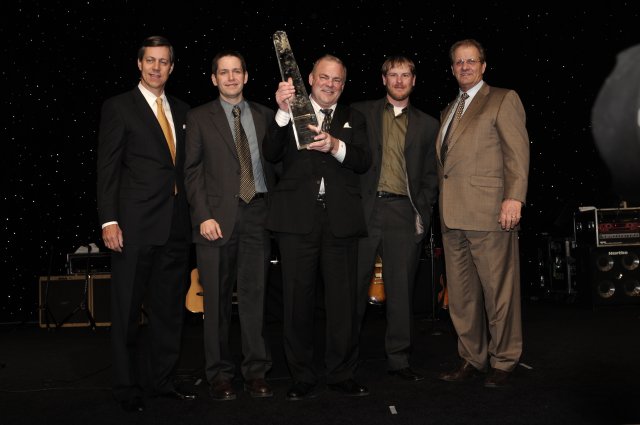 by AGC of America

Oregon’s Lake Oswego Interceptor Sewer project was named the most significant construction project of 2010. The project’s contractor, Advanced American Construction, Inc., was the grand award winner while 19 other firms received the AGC’s Aon Build America Awards in other categories.

The Lake Oswego Interceptor Sewer project, which won for best new municipal and utilities project, is a large and dramatic new system that replaced a 50-year-old corroded and hazardous sewer line.  The project required crews to drill 270 feet into bedrock to install anchors for the system. The work was heavily regulated to ensure there was no impact on recreational activities, local business operations and environmental practices for lake residences.  The project was completed without any lost time accidents and included more than 1,200 commercial dives.

Also winning an award, in the Municipal & Utilities Renovation Category, was Kiewit Infrastructure West Co. for the Val Vista Water Main Rehabilitation CMAR project. The project is a critical piece of infrastructure that transports drinking water to as many as 60 percent of Phoenix’s population. Due to short construction windows, the team used special technology that eliminated the need to excavate from outside the pipeline and minimized impact on the surrounding communities. The result was the largest project of its kind performed in the United States, and included nearly 31,100 feet of pipeline.

The Aon Build America Awards recognize the nation’s most significant construction projects.  A panel of judges, representing all areas of construction, evaluated over 115 projects this year, assessing each project’s complexity, use of innovative construction techniques and coordination with partners, among other criteria.  The awards, which were announced during the association’s annual convention in Las Vegas, are considered by many to be the most prestigious recognition of construction accomplishments in the U.S. The 2012 Awards submissions period will be opening this summer, and the deadline will be November 4, 2011. View details of the Aon Build America Award Winners and the Merit Winners. View photos of the winning projects here.